‘Lock Up Light Up’ campaign

Lock Up Light Up is An Garda Síochána’s anti-burglary awareness campaign which encourages homeowners to protect their homes over the winter months, when burglaries traditionally tend to rise. 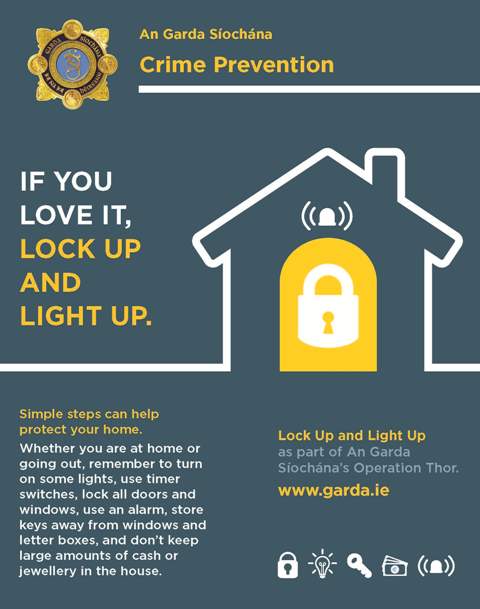 The campaign is part of Operation Thor, a national multi-strand anti-crime initiative which actively targets organised crime gangs and repeat offenders. It involves a wide-range of enforcement, crime prevention and public awareness measures.

Operation Thor has resulted in a substantial reduction in domestic burglaries across Ireland since it first launched in November 2015. Over the winter months, targeted activity across Garda divisions will include checkpoints, increased patrolling in burglary hot-spots, and the provision of impactful and useful crime prevention advice. The Gardaí will also be working with its partners on initiatives such as Text Alert, and denying criminals the use of the road network.

Data from the Garda Analysis Service shows that one-third of all burglaries are through the front doors – with most burglars using their own body to gain entry. Other key findings include:

Having your home burgled is a distressing and traumatic experience. An Garda Síochána is hoping that by raising awareness of some simple crime prevention measures, such as locking up and lighting up, less Irish families will have to endure the pain of being burgled this winter.

If going out, Irish homeowners should endeavour to make sure their home looks occupied – to Lock Up and Light Up. Use timer switches to turn on lights, lock all doors and windows, store keys away from windows and letterboxes, and use your alarm.