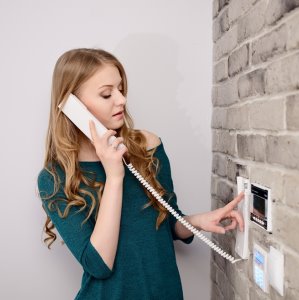 Simple Intercom System with One Sub-Station

A simple intercom system consists of one “Master Station” and one “Sub-Station”. The Master Station is typically located at the point inside the building where communications is to be received. The Sub-Station is typically located at the point where the communication is to be originated. For example, in an office building, it may be desirable to keep the front entrance door locked, and to provide a security intercom system to allow communications between the outside of the entrance door and the receptionist’s desk in the lobby. In this situation, the intercom Master Station would be installed at the receptionist’s desk, and the Sub-Station would be installed on the wall outside of the entrance door.

In many facilities, there may be a need to communicate with more than location. For example, in the office building described above, there may be a need for the receptionist to communicate with the employee entrance door and the loading dock door in addition to the front entrance door. To meet this need, Master Stations are available that can accommodate multiple Sub-Stations. Models that have a capacity of three, five, or ten Sub-Stations are common.

Sometimes, there is a need to receive intercom calls at more than one location in a building. For example, you may wish for the receptionist to receive calls during normal business hours, but after-hours, you may wish for calls to be received at the security control room. To meet this need, it is possible to provide multiple Master Stations, each capable of communicating with one or more Sub-Stations. Communications between each of the Master Stations can also occur if this is needed (for example, receptionist could use intercom to talk with security control room and vice versa).

Intercom stations are typically available in two versions, a “handset” version, and a “hands-free” version.

Some intercom stations come with a handset but are also capable of being used hands-free. These stations have a speaker/microphone in addition to a handset and usually work as a hands-free unit unless the handset is picked up.

Intercom systems are also available that allow “wireless” communications between Master Stations and Sub-Stations. These systems typically use radio signals to provide the communications path between stations and don’t require any type of wiring. The advantage of these systems is that they are quick and convenient to install. The disadvantage of these systems is that they don’t work well in all settings, and may not work at all in buildings that contain large quantities of concrete and steel or when there are long distances between the stations. Most wireless intercom systems also lack the features needed for the larger commercial user and are considered to be less reliable over time than a wired system. Because of this, wireless intercom systems are usually best suited for use in private homes and at smaller commercial businesses.

A recent development in intercom systems is IP network connected intercom stations. These stations are capable of being connected directly to an organization’s existing data network. This usually means that the intercom station can be plugged into a nearby network outlet or unused port on a nearby network switch. This can greatly reduce the costs of installing wiring and offers great flexibility in the way that intercom systems can be installed and modified. IP connected intercom stations are well-suited for use in large campus environments, particularly when the campus includes buildings that are off-site.

When an intercom system is used to communicate with a door, it is often desirable to have the ability to remotely unlock that door. For example, if an intercom system is used between a receptionist’s desk and a locked entrance door, it is common to provide the ability to remotely unlock the door for authorized visitors. Many simple intercom systems incorporate a door release button into the intercom Master Station specifically for this purpose. This button is wired to electrified locking hardware (such as an electric strike) on the door, and when the button is pressed, the door unlocks.

Intercom systems are available that incorporate video surveillance features. Video intercom Sub-Stations are similar to regular Sub-Stations except that they also include a small built-in video camera that provides a direct view of the person operating the station. Most cameras offer a fixed viewing angle; some cameras can be moved up and down and right and left by the person receiving the call. Video intercom Master Stations are similar to regular Master Stations except that they also contain a small video monitor. This monitor is used to view the image produced by the camera in the video intercom Sub-Station.

The advantage of video intercom systems is that they allow the person receiving a call to verify the identity of the person calling. This can be particularly useful in door control applications where it is desirable to confirm which person is at the door before pressing the door release button.

It is possible to mix and match simple intercom Master Stations and Sub-Stations to create a relative large system. However, when a facility becomes very large and has  many Sub-Stations and Master Stations, the system can become complex and unwieldy. This can occur in campus settings where there are many buildings and many doors.

To meet the needs of larger systems, “exchange” intercom systems were developed. These systems get their name because a central controller, called an “exchange”, is used to manage intercom system traffic. Rather than being connected directly together, Master Stations and Sub-Stations are connected to the exchange. Most exchanges allow the use of both wired intercom stations and IP network connected stations. When a call is placed, it first goes to the exchange, where it is them routed to the appropriate station.

A new breed of system, called an “exchange-less” intercom system has recently been introduced. These systems use IP connected stations that have built-in processors and memory that allow them to provide many of the features and benefits of a exchange system, without requiring the use of an exchange itself. These systems can offer the smaller user a very capable system at a fraction of the cost of an exchange system. While still more expensive today than simple intercom systems, we see exchange-less IP network connected systems as the wave of the future.

For example, with a fully integrated system, when a “door-forced-open” or “door propped” alarm occurs at at access controlled door, the Sub-Station at that door can automatically  be connected to an intercom Master Station at the security control room. In addition, the camera at that door can automatically be displayed on a video monitor. This allows the security officer to both listen to and see what is going on at the door and possibly give a verbal warning to those who may be violating a security procedure (“Hey, you, please don’t prop the door open…”).

Security intercom systems, when combined with appropriate signage, can also be used for customer service functions such as providing directions to visitors, allowing employees to request a security escort to their cars, and notifying security of safety violations.

Safenet Security is a professional security company and specialises in security intercom systems.