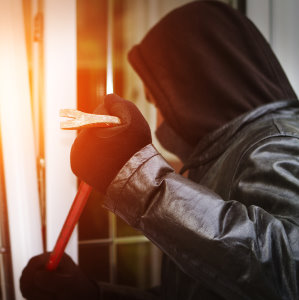 Burglar can break through your front door in just nine seconds, says expert

Burglars can break into most homes through the front door in nine seconds flat, a security expert has warned

And criminals know the exact type of weak doors and fragile windows they can easily, and quietly, infiltrate with basic tools.

As the fear of robbery continues to blight the country, security experts are calling on homeowners to think about investing in “physical security”,  house alarms, CCTV cameras, burglar alarms and guard dogs to protect their properties.

Security firms say some families are spending up to €10,000 on perimeter surveillance amid fears of being burgled by a violent gang.

However, experts argue that hard lessons learned by neighbouring EU states have been ignored by the Irish Government.

After a spike in residential crime across Europe in the 1980s, most member states introduced a policy of physical security as well as burglar alarms.
They strengthened their buildings by introducing specific standards for sturdy robust doors, high-specification locks, laminated glass and strong fastenings on windows to stop burglars gaining entry.

Ciaran O’Connell, argues that the Government needs to take a more balanced approach to home security and is calling for new housing regulations to ensure the use of stronger doors, windows and glass.
Speaking to the Sunday Independent, Mr O’Connell, who has a background in building, believes “Ireland is now the residential crime capital of Europe”.

“If people are seriously considering where to spend money to protect their home it should be on physical security first, separate to home alarms and CCTV,” he added. He says French doors, patio doors and sliding doors are the most vulnerable and houses built during the Celtic Tiger are particularly unprotected.
He is calling on the Government to analyse Ireland’s home burglary performance compared with other EU member states.

Burglary expert Jim Toal, who advises gardai and Neighbourhood Watch schemes on burglary prevention, says some criminals can break through front doors in “nine seconds flat, whether or not an burglar alarm is fitted”.